Alright, I confess, I had to look George Soros up on Wikipedia and after having read this amazingly intelligent, candid and forthright article to be published in the New York Review in April I expected to discover that he’s a former Middle Eastern envoy from somewhere or another, or an Eastern European diplomant, but no. He’s a Hungarian billionaire.

What strikes me about this article is not so much its neatness – he clearly has a bird’s eye view of European and US politics, and I suppose that’s to be expected from ‘The man who broke the bank of England’ – but rather its candour. One of my favourite quotes from it was this:

“[Israeli Prime Minister Benjamin] Netanyahu, for instance, is dead set against a deal with Iran because peace with Palestine would end his political career in Israel”

It was a huge relief to hear someone speaking so frankly. Most of the coverage and analysis of world events that I come across is full of mealy-mouthed allusions to the personal interest of politicians, and the effects that this has on global politics. We take for granted, for example, that the Conservative party in the UK has recently identified pensioners as a group it needs to canvass for support at the next general election, and has designed a budget to support that. Why have they done this? Because they have a personal interest in returning to power first, and for all other reasons second. Whether or not supporting pensioners is absoutely the best thing that they could have done at this time almost doesn’t come into it. We’ll never get to the truth of all that because of the rhetoric they’ve planned in advance to support it. This is universally accepted. We talk about a party ‘winning votes’, as if politics were a game in which the interests of the country, and on a larger scale, the world, come second. The conservative party and their supporters will argue, of course, as I’m sure will Benjamin Netanyahu, that they are the best party to run the country, that their survival in power is in the best interests of us all… But frankly, everyone knows that this is horse-shit, don’t they?

I liked his treatment of George Bush (a man whom Soros spent millions trying to remove from power in the run-up to the 2004 election), too, and his description of US foreign policy since the cold war. To paraphrase: After the fall of the Berlin wall, the US emerged as the single greatest power in the world but George Bush failed to understand how to use this power in the best interests of America. He didn’t grasp that soft power, the power of attraction is what sustains empires. He went on a crusade after the ‘Bad Guys’ and demonstrated that America was no longer fit to be in charge. This is why, to get to the heart of the matter, the current situation in the Ukraine is so important.

Such is the opinion of George Soros. I won’t paraphrase the entire article, he puts it much better than me, but I don’t care so much about the content, it’s his delivery that I like, his frankness.

Should politicians not be like this? Should we not demand from them a disinterested, bird’s eye view of the political landscape. Should we not be demanding that the steps of the geopolitical dance be made more obvious to us? At least then we could tell them apart. Should we not be supporting ‘conviction politicians’ like the late Tony Benn even, dare I say it, the late Margaret Thatcher purely because they speak a truth that they believe in, regardless of the nature of that truth? Thin ice I know, but I’d like to hear what you think. Personally I’d rather be lead astray by conviction than kept in the dark and fed lies.

Law enforcement agencies have evidence that on the territory of the Autonomous Republic of Crimea, unknown individuals, under the guise of the Ukrainian side, on the night of March 3 to 4th are planning the murder of 3-4 Russian soldiers. The motivation for this is the legalization of the introduction of Russian troops on the territory of our country, warned Velychkovych.

“We would like that these people come to their senses, because with this act, you would provoke bloodshed, which is not (now) in Crimea,” he stressed.

“It is very important that you understand that, for us, the life of a person is of the highest value. We urge you to stop, added the Deputy Minister of Internal Affairs.

“Keep in mind that… 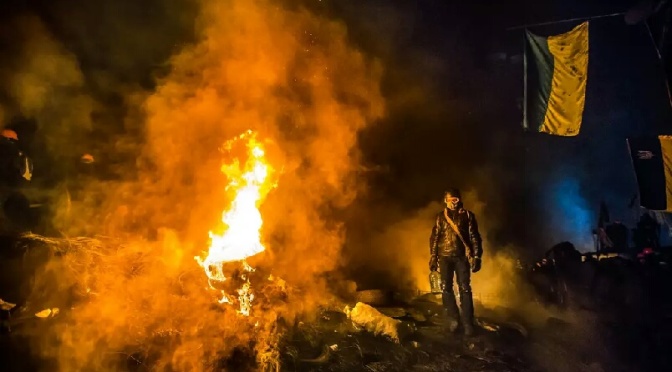 In the days following the assassination of Archduke Franz Ferdinand in 1914, embattled British Prime Minister Herbert Asquith wrote grumpily to his lover Venetia Stanley about the jubilant reception of the King by crowds in Trafalgar Square. “War,” he grumbled “or anything that seems likely to lead to war is always popular with the London mob.” Now, as Russian troops close in on key strategic locations in Crimea, Ukraine arms itself and the world holds its breath, whilst it might fall far short of excitement, who among us can deny a tingling sense, at least, of bearing witness to something significant?

The stakes are high. The UK, the US and Russia itself are signatories to a treaty enshrining the sovereign rights and the borders of the nation state of Ukraine. Although it may not be legally binding, there seems to be a moral imperative at least for the West to get involved. Obama’s rhetoric of ‘costs’ suggests that relations between Russia and the West are set to deteriorate even further, even if it falls short – as it surely will – of outright war.

I remember listening to the radio on the morning of 7th October 2001, hearing that airstrikes had begun against targets in Afghanistan. Whilst I, like everyone else, had expected it, and greeted it, therefore with the grim acceptance and the sadness that it deserved, I can’t deny that I also felt a strange sense of relief. Finally, I thought to myself, something is actually happening. The shock of the attacks on the world trade centre, I remember, was so total that it almost didn’t count. I couldn’t conceive of it as a coordinated act with a purpose and a meaning. It felt, in my teenage mind, like a disaster, a calamity, an act of God. The sleek flight of the jets, however, and of the missiles, told me something about our nation, our civilisation, and our determination to defend its values.

I was naive. Was it the stagnant air of those times? Was I charged up with the nationalist rhetoric of Bush and Blair? Had I seen too many war films? Was I simply bored? Whatever it was, somewhere deep in my soul, I bought it, but I don’t buy it now. If I feel now a stirring of that same relief, that same tingle of history in the making it is because of this:

Everything is changing. The uprisings we have seen all over the world, and at home are testament to that, as is our own deep sense of dissatisfaction. Not to mention the weather. The events in Ukraine, the belligerence of Russia, whatever power is deployed by other nations to contain it are all part of an elegant dance, the steps of which are known only to the most powerful. The forces that they have at their command, the complexity of their scheming are unthinkable. To see the unfolding, even of Putin’s ‘little schemes’ in Crimea and Georgia before it inspires a kind of awe: a few figures of the dance brought out into the open air.

For all its elegance, for all the drama of its unfolding, the end, of course, is always bloodshed and destruction. Rifts and scars that rarely heal completely. If only I could still believe, as once I did, that there was a purpose and a meaning behind it. If only these people did not die, were not dispossessed, imprisoned, raped and tortured in vain. If war were philosophy writ large I might, just might, be able to support it; but, although it’s presented to us with stirring rhetoric and moralising, do any of us really believe it anymore? No. Rather war, any war, is a piece of a much larger puzzle. A flashpoint, a rising bubble in the pot of geopolitics as it nears the boil. And the heat beneath it all increases. It is out of our control.

This, I think, is exactly what excites the mob. This that kindles, as we watch these dramas unfold, that darkening spirit in all of us who have never lived through war: Chaos. Deep inside ourselves we are sick of this relentless order. Sick of being the cogs in someone else’s machine. Sick of dancing to a tune that we can hardly hear over the thudding jackboots of progress. We want, in short, the world to be a better place, even if we get there through a trial by fire.

We believe, of course, that we ourselves will not get burned. For those of us sitting in comfort in the West, the so-called ‘lines of powder’ those lines of racial, religious and cultural division along which conflict tends to flare provide, in our minds at least, the battlegrounds on which our moral uncertainties are played out on our TV screens. The Art of War, the dance on which we’re lead is in convincing us of that myth; or else in blinding us to the truth, using our sense of drama to kindle support with stealth, sleek hardware and lies.

Thanks to snamess for the featured photo, obtained under Creative Commons License no changes were made to the original image.

Follow ShoalBehaviour on WordPress.com
Gotta Find a Home
Musings From a Ragged Soul

Seeking happiness one step at a time

The Soul of Matter

About literature and the ressurection of spirit in the world

Ethics and aesthetics are one

Only the unmeasured is free.